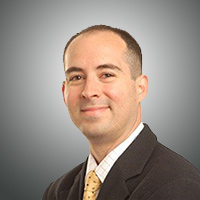 Professor Colombo teaches courses in corporate, securities and contract law at Hofstra University’s Maurice A. Deane School of Law, and serves as associate dean for distance education (overseeing the law school’s online degree programs). His scholarship has focused largely on issues of securities fraud, corporate law and financial regulation, and has done so via the application of natural law theory, economic theory, moral philosophy and neuroscience. More recently, his scholarship has addressed the constitutional rights of business entities. In 2014 he authored a book on the subject, titled The First Amendment and the Business Corporation, published by Oxford University Press.

Before joining the Hofstra faculty in 2006, Professor Colombo served in the Complex Global Litigation Group of Morgan Stanley & Co., Inc., as vice president and counsel. Prior to that, he practiced as a litigation associate at the New York office of Sullivan & Cromwell. From 2000–2003, Professor Colombo also served on the Committee on Professional and Judicial Ethics of the Association of the Bar of the City of New York.