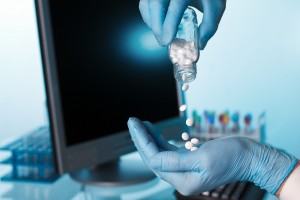 In the United States, the Food and Drug Administration (FDA) protects the public good by requiring all new medications to pass through a rigorous approval process. Only about 12 percent of drugs that enter the process ever hit the market, and drug companies invest, on average, $2.6 billion for every successful drug. The FDA approval process can take as long as 10 years, and involves five steps.

The first step in any scientific process is understanding the problem that needs to be solved. A drug company typically begins its research by studying a particular disease or condition. The researchers seek an understanding of the condition at the molecular level to provide the best possible targeted treatments. Targeted treatments attack or support a single molecule. The goal of the medication is to trigger the intended effect in the body or the bacteria/virus/fungi without causing ripple effects in other parts of the body. Research in this area can take decades, but much of the information is shared throughout the scientific community, so few companies bear the full brunt of the cost.

In the second stage of the process, researchers use their knowledge of the disease and the target molecule to start the search for a lead compound. A lead compound is the cornerstone of any medication, and its discovery is crucial in the development of a drug. Researchers look for lead compounds through clinical experimentation, but even when they find a compound that works, it may not make it into the final product. As early as the discovery stage, researchers must consider how the medication makes it to the end consumer, how much the medicine will cost, and the method of manufacture. If the cost to the consumer is too high, the market becomes very narrow, leaving the company with little chance of recouping its investment in the drug.

Moving a lead compound into lab tests is a big step forward in the drug development process. By this time, drug companies have poured millions of dollars into a project, so there is considerable pressure to prove the effectiveness of the potential medication. The first lab tests involve the study of the drug in a controlled lab environment, outside of living tissue. Researchers must be able to prove that the drug works to treat the illness, and that it does not produce toxic side effects over time. After the scientists establish the drug works in theory, they can move on to animal tests. Here the lab must demonstrate that the body can metabolize the drug in a reasonable amount of time, leaving little trace after excretion. Animal tests also allow the company to experiment with different manufacturing options to meet the demands of the market. The animal testing stage may last several months or years before the FDA approves human tests.

The FDA estimates that only 1 in 1,000 compounds that make it through pre-clinical tests will ever reach human testing. Despite the long odds, there are more than 6,200 drugs currently in human trials in the United States. At this stage, drug companies file paperwork to become investigational new drugs (IND), where the application and lab results are examined by the FDA, a review board, and ethics panel. Drug companies must also provide a detailed plan for conducting the human trials, what they expect to find, and a timeline for completion. The human trial phase is the longest stage of the drug approval process, with most drugs spending 6-7 years in testing. Human trials occur in three phases:

The first phase of testing is done on volunteers who are healthy. Testing the drug on these subjects is meant to show that the drug is non-toxic and determine which side effects to expect in sick patients.

If the drug is safe, the FDA will allow small-scale testing on patients who the drug targets. In most cases, the trial includes 200 or more patients, divided into two groups. One group receives the drug, and the other receives a placebo. Researchers study the effectiveness of the drug over the placebo to prove the drug performs as expected. Researchers take careful notes about additional side effects and recommend dosage and treatment schedules for the medication.

A drug that makes it through small-scale testing can move on to Phase III. In the final phase, companies test their drugs in international clinics. The cost of conducting these large-scale trials is enormous, straining the resources of all but the largest pharmaceutical companies.

Upon completion of all of the required clinical trials, the drug company can submit its application for FDA approval. The application includes documentation of every stage of the process, including input from the review board and ethics panels. The final approval process proceeds along one of two tracks. For drugs that meet an unmet need in the market, or provide substantial improvements in current patient care, the application review takes approximately six months. The standard review process takes about 10 months for most drugs.

It is extremely important that the drug developmental process is understood, particularly for entrepreneurs and pharmaceutical companies. Without a solid understanding, companies and individuals run the risk of unintentionally breaking federal laws. Take the blood-testing startup Theranos as an example: Theranos sought to provide more accurate blood tests at a much cheaper price, yet are now being investigated by Congress on whether they have stuck to federal guidelines. Due to this, the once praised billion dollar company is now losing funds and receiving a multitude of bad press. Passing the final hurdle allows companies to sell their product to consumers, doctors, and hospitals. The years of investment finally pay off with a protected drug patent that creates an exclusive market for the drug. If the drug proves successful, the period of patent protection can reap billions of dollars in profit for the company.