How Health Law Cases Move Through the American Legal System 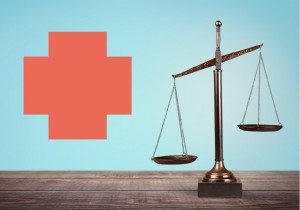 Taking a health care case into the Federal court system can be a significant commitment of time and assets for every party involved. The typical case can take months to find its way into a courtroom for the first time, and even longer to finally work its way in front of a jury. Health care cases in the United States follow a predetermined pattern of pretrial, trial, and post-trial activities.

The first step in any court case is the pleading. This is the legal document in which the plaintiff explains the basis for the lawsuit, and the kind of damages sought. The defendant can respond to the initial filing, or ask the court to consider dismissing the action as a frivolous lawsuit.

After the court accepts the pleading and puts the issue on the docket, the lawyers proceed to the discovery phase. In this period, both sides gather the evidence and testimony they wish to provide at trial. The take depositions, seek scientific opinions, and secure the expert testimonies they need to make their case.

In a health care case, discovery is often a contentious issue. Pharmaceutical companies try to hide evidence of poorly manufactured drugs by claiming them as corporate secrets, while hospitals and doctors attempt to limit access under the guise of doctor-patient confidentiality.

While in the discovery phase, both sides have an opportunity to file important motions regarding the trial, and the admissibility of evidence. The type and number of motions may be used as a stalling tactic to gain more time before the trial begins, or drain resources from the other party. Motion hearing may last for several months, and force the court into rescheduling the trial.

Over the course of pretrial hearings, one or both sides may determine that going to trial is not in their best interests, so they may seek a settlement. The courts prefer settlements whenever possible as a way to keep the judicial pipeline clean, but in some cases, a trial is the only option.

Americans have the right to a trial by a jury of their peers, but the defendant does have the option of a bench trial.

Jury trials begin with voir dire, or the process of jury selection. Usually the two parties choose a jury of 12 people, with a couple of alternates to use in an emergency. The trial can start immediately after the jury is seated.

A bench trial places all of the power in the hands of the judge. Using this option, the defense allows the judge to make all rulings on the merits of the case, sort through the evidence, dispense a verdict, and determine the punishment.

The first thing the jurors hear about the trial is the opening statement from both sides. This is a time to lay out the general outline of the case, pointing out specific pieces of evidence the jurors should follow when making their decision.

There are few limits on what the attorneys can say, which lets both sides speculate or make assumptions they will not be able to make during the case.

The plaintiff has the right of first presentation, and will call the first witness to the stand. In health care cases, the first witnesses are generally those involved directly with the injury or victimized by the malpractice. These witnesses provide the necessary back story the jurors need, in order to understand the case. Testimony then proceeds to expert witnesses and scientific analysis.

The defense has the opportunity to cross-examine each witness, and call for a rebuttal when necessary. After all of the plaintiff’s witnesses have been called, the defense can call its own set, and the roles are reversed.

Evidence brought up in trial can bring into question the admissibility of evidence one side wants to present, or one side may believe the other violated the rules both parties agreed upon before the trial began. When issues like these arise, the judge can call a brief halt to the trial to hold motion hearings. Unlike the pretrial motions, the judge will press both sides to be brief, so there are no unnecessary delays.

The last words the jury hears from the lawyers are the closing statements. Here, the attorneys tie together all of the threads of argument they presented during the trial, and make attacks on the weaknesses in the other side’s position.

When the closing statements are finished, the judge will issue a statement on the standard of proof required in a civil action, and a list of the issues the jury must discuss. As civil trials, health care cases use the “preponderance of evidence” guidelines to determine liability. The defendant can only be held responsible for an injury if the evidence shows the defendant did not fulfill their legal duties to the plaintiff or violated the plaintiff’s rights.

It is important to note that jurors in a civil case do not have to make a determination beyond a reasonable doubt, or that one side is completely at fault and the other is completely innocent. The “preponderance of evidence” simply means that in this case, one side is more right in their claims than the other.

Upon receiving instructions, the jury enters deliberations. In a federal jury trial, the decision must be unanimous, though it can be a simple majority in some state courts. Deliberations take as long as needed, but if the jury decides there are too many irreconcilable differences, the judge can rule the jury hung.

The jurors will present their decision to the judge, and the post-trial phase begins, if the plaintiff won. A victory by the defense means the case is complete.

Punishment in a civil trial is typically a monetary reward determined by the judge. Damages are assessed on two levels. First, the court decides the direct compensation for the injury or loss of rights. There is a limit to the total compensation available with this type of damages. Second, the judge can assess punitive damages, which include provisions for pain and suffering, emotional distress, and other punishment to deter bad behavior in the future.

The loser in any federal case has the right to appeal to the US Appeals Court. In order for the appellate court to take the case, the party presenting the appeal must show errors in the conduct of the trial, wrongful admission of evidence, or instructions to the jury. If the court decides there was an error made, they will interpret the evidence and make a ruling themselves or send the case back to a circuit court.

Health care cases work their way slowly through the court system, so that justice can be done. Through the trial and the appeals process, the courts strive to provide both parties with an even playing field to make their case, and convince a jury.

Administrative Office of the U.S. Courts