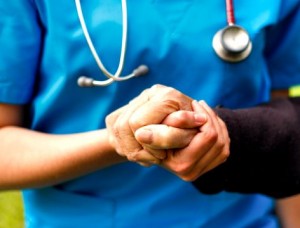 20 years before Medicare and Medicaid were signed into law, President Truman envisioned a national health care plan that would pay doctor and hospital expenses, as well as nursing and dental care. He sent a message to Congress indicating his intention to pass a bill, but was ultimately unsuccessful.

President Kennedy also attempted to get a national health care plan passed by Congress after a study made it clear that over half of Americans were uninsured. However, it wasn’t until Lyndon B. Johnson’s presidency that a health care plan—Medicare and Medicaid—was passed for seniors as authorized as an amendment to the Social Security Act. At the ceremony, President Truman was issued the very first Medicare card.

The difference between Medicare and Medicaid is that the former is an insurance program while the latter is an assistance program. Medicare is meant mostly for those over 65 years of age, yet was expanded in 1972 to younger people with disabilities. It is funded through payroll taxes, general revenue, and other sources like beneficiary premiums, which go to the Medicare Trust Fund in the National Treasury. The money in this fund is not spent on anything else. Total Medicare expenditures amounted to a 14% share of the national budget in 2014.

Medicaid, an assistance program for low-income people, is administered differently in every state, but all Medicaid programs must cover “mandatory” services like physician and nurse practitioner services, inpatient and outpatient hospital services, laboratory services, and Early and Period Screening, Diagnostic, and Treatment (EPSDT) services for children younger than 21 as part of the Children’s Health Insurance Program (see below). In all states health providers cover additional services as well, such as prescription drug services, dental care, and other services. However, not all health care providers are required to participate in Medicaid in the first place.

Signed into law in 1997, the Children’s Health Insurance Program (CHIP) provides children with health care provided their families are under 138 percent of the poverty line. It is a program administered through Medicaid. States have the option of dispensing coverage through various avenues, such as Health Maintenance Organization (HMO) plans, state employee coverage plans, or other coverage deemed sufficient.

CHIP provides coverage for everything that Medicaid does, as well as EPSDT services, including mental health and dental services.

The Federal Children’s Bureau, founded in 1912, was the first government body to serve children with complex health issues like sensory, motor, or neurological conditions. Then, in the Social Security Act of 1935, Title V provided not only for the health of mothers and children, but also included language on funding services for “crippled children.” Though this is vague—and, arguably, dated—language, it set the stage for further funding on this front, including for education, outreach, provider training, and community assistance.

For decades after that, children with special health care needs were classified and provided for according to their specific conditions. Eventually, though, it became clear there were challenges of access, coordination, and service challenges no matter the condition. This understanding gave rise to the concept of “special needs,” which reframed the thinking around narrowly-defined conditions to a more holistic focus on the children’s common needs and challenges.

Children with special needs and their families often require long-term health care services, and they spend more money on health care than other families. They are more exposed to weaknesses in the health care system related to access and cost, and they experience more disparity when it comes to health care access. In the 1980s, the U.S. Surgeon General’s Office and the Maternal and Children’s Health Bureau adopted a more holistic approach to providing care to people with special health needs, coordinating funding and resources across diagnoses in recognition of shared special health care needs.

In 1956, the Dependents Medical Care Act authorized the Department of Defense to contract to civilian health care plans. In 1966, the Civilian Health and Medical Program for the Uniformed Services (CHAMPUS) was established, a cost-sharing program that served the uniformed service for 30 years.

In 1993, CHAMPUS was extended and modified, becoming known as Tricare, which refers to the three plans it offered: Tricare Prime, Tricare Standard, and Tricare Extra.  Since then, Tricare has been restructured in some minor ways, like the addition of Tricare for Life for Medicare-eligible individuals.

The largest health care system in the United States is the Veterans Health Administration (VHA). It provides care at 1,233 facilities, which includes the 168 Veterans Affairs (VA) medical centers and 1,053 outpatient sites. More than 8.9 million veterans rely on its services.

Herbert Hoover started the Department of Veterans Affairs in 1930 in order to consolidate all of the services for veterans into one department. In 1945, the director of VA medicine, Major General Paul Hawley, began associating VA hospitals with medical schools, and started teaching fellowships through VA’s sites of care. By the time he retired, there were 125 VA hospitals.

VHA’s administration has met with some difficulties over the years, and the system has had to adapt repeatedly to high demand. After a 2014 scandal that involved phony waiting lists and the deaths of veterans possibly caused by lack of timely care, many experts and politicians have repeatedly called for reforms.

The basis of providing health care to American Indian Tribes grew out of the government-to-government relationship established between the federal government and Indian tribes, and has been reinforced and legitimized through many executive orders and treaties.

Indian Health Services (IHS), an agency administered with the Department of Health and Human Services, provides health services to American Indians and Alaska Natives. Today it is the foremost provider of health services to these indigenous populations, and its goals are to improve the general physical, mental, and social welfare of American Indians and Alaska Natives in recognition of the sovereignty of Indian American tribes.

The Federal Employee Health Benefits (FEHB) Program is intended to provide care to federal employees, retirees, and their survivors. Prior to its creation, federal employees could not obtain coverage through the government, but had to find it on their own through unions or employee associations plans offered to them. As part of Truman’s vision for national health care, he recommended in 1951 that the federal government provide for its employees’ health. In 1960, the FEHB was created.

The general model has not changed since then. The program allows for competition between private insurers to offer different kinds of coverage within broader guidelines established by the government.

An agency within the Department of Health and Human Services, Substance Abuse and Mental Health Services Administration (SAMHSA) was established in 1992 to make both substance abuse and mental disorder information more widely accessible.

Often, those suffering from substance abuse and/or mental illnesses are excluded from the current health care system. Almost 20 million people in need of substance abuse treatment could not get it, and 11.8 million people reportedly could not get the mental health care they sought. On a broad level, this gap in access can create a chain-reaction effect among communities that endangers the social welfare of everyone.

Through programs, grants, information, and policies, SAMHSA helps to reduce the impact of substance abuse and mental illness in the U.S. Their strategic initiatives attempt to build public awareness, support the behavior health field with data and research, and using evidence-based health practices to support the development of systems better equipped to deal with the problems of mental health and substance abuse.

Refugees are among the most vulnerable of our populations to lack of access to care because of language barriers and poverty. But because of the U.S.’s stated commitment to humanitarian concerns and to being a safe haven for the oppressed, the Department of Health and Human Services has committed itself to helping them.

The first enactment of refugee legislation was in response to the admission of more than 250,000 displaced Europeans after WWII. Services for these refugees came from private religious organizations. This set a precedent for the public-private cooperation in refugee legislation to come.

After the Vietnam War, the U.S. settled hundreds of thousands of displaced Indochinese and passed The Refugee Act of 1980. This legislation dictated comprehensive standards for resettlement services for all refugees, using the definition for “refugee” in the U.N. Protocol.

In 2015, the Refugee Preventive Health Program became the Refugee Health Promotion (RHP) Program, which focuses especially on recently arrived refugees who face the most challenges to accessing health care needs. These refugees get short-term health insurance from the program. After that, they may be eligible for Medicaid or CHIP. The RHP emphasizes health literacy, access to health and “emotional wellness services,” and access to affordable health care beyond the first eight months.